My mother once told me that a great aunt of mine accidentally poisoned herself after picking and eating mushrooms in Poland.

She had gone to the forest in the morning with one of her sisters, calling in on a handful of secret locations where they knew the best varieties often fruited - a serious mushroom hunter, like a journalist, never reveals their sources - and by early evening she was dead, the victim of mushroom misidentification.

You would think this cautionary tale would serve to dissuade me from ever handling any type of fungus - I'm sure this was my mother's intent when she relayed it to me - but on the contrary, it's enkindled a sort of fascination for this often maligned biota, which luckily Anton shares. At the risk of sounding eccentric, the joy of finding a large, pristine, and edible mushroom has to be one of life's best little thrills.

Mushroom picking, or mushroom hunting as it is also called (though no violence is required to participate, I can assure you), goes back for centuries, and is not some occult pastime as modern city dwellers would like to believe; it's really just foraging for food.

It's hugely popular in Central and Eastern Europe but less so in the UK or North America, although it's gaining traction (just Google 'London mushroom forays' or 'Fungi to be with - putting the FUN in FUNGI' and you'll see what I mean). In fact, the surge in popularity in the UK has actually led to some bans being imposed in both Epping and New Forest. Even so, I used to get some strange looks from Londoners when I said I was going mushroom picking; the default assumption being it was to find magic mushrooms and get high.

But in Switzerland, where we were for two weeks, and now Italy, it's a perfectly acceptable thing to do, and is even regulated by the state to ensure there's enough fun(gi) for everyone. In Switzerland, for example, there's a 10-day moratorium on picking every month to allow crops to replenish. In Italy, you're allowed a maximum of 1 kg of mushrooms per person, although in reality I think it's whatever you can get away with as I struggle to see how a rule like that can be properly enforced (Anton and I have decided we'll play the dumb tourist card if we ever get caught with more). In France, you can even take your mushrooms to the local pharmacy for identification so you don't end up like my poor old great aunt.

So far, Anton and I have been quite successful in our mushroom forays on the continent. And I don't mean in the 'lucky-to-be-alive' sense. In the Magic Wood, we would often spot smatterings of chanterelles near the boulders and would gather them in Anton's cap in between ascents, to consume for dinner later that evening. The Italians at the campsite would come around and marvel at the haul, offering recipe tips; the Germans were impressed that we should be so brave and would check on us in the morning to see if we were feeling OK.

A few days before we were due to leave Switzerland, we decided to go on a hike rather than climb, as the forecast called for rain and I wasn't feeling particularly great after scraping my ankle the week before.

We started on a well-marked trail just below the Rofflaschlucht restaurant and guesthouse, and immediately spotted various mushrooms, toadstools and other fungi growing off the path. Fifteen meandering minutes later, we had strayed onto a steep slope, littered with pine needles, small boulders, moss, and rotting wood - the perfect environment for mushrooms. We weren't disappointed.

In addition to the 2 kilos of chanterelles - some of which were the biggest specimens I'd ever seen - we found a beautiful, perfect parasol mushroom, a large horse mushroom, several huge milk caps, which Anton later processed, and a few other interesting varieties, which we didn't eat. 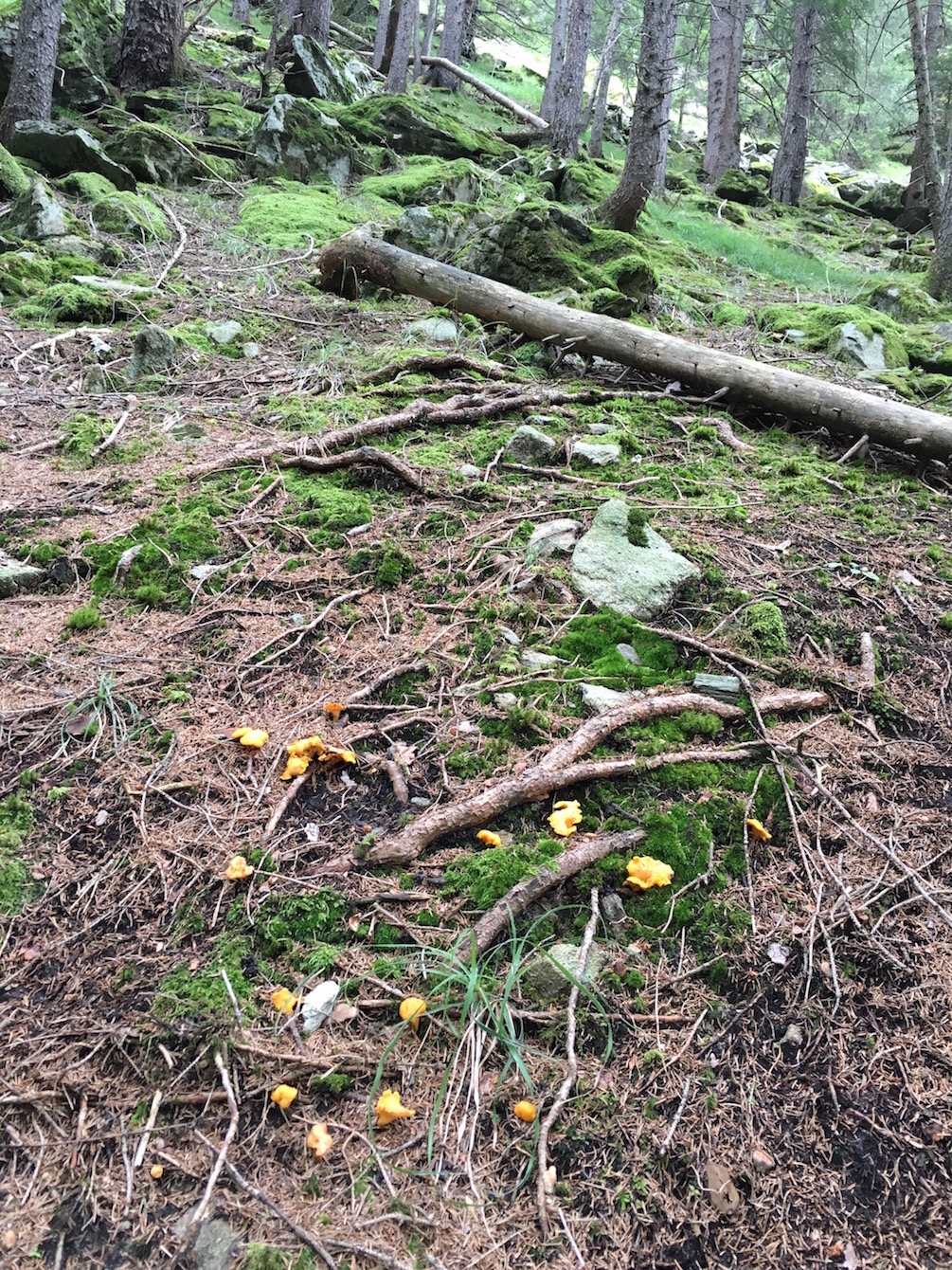 A cluster of chanterelles before picking 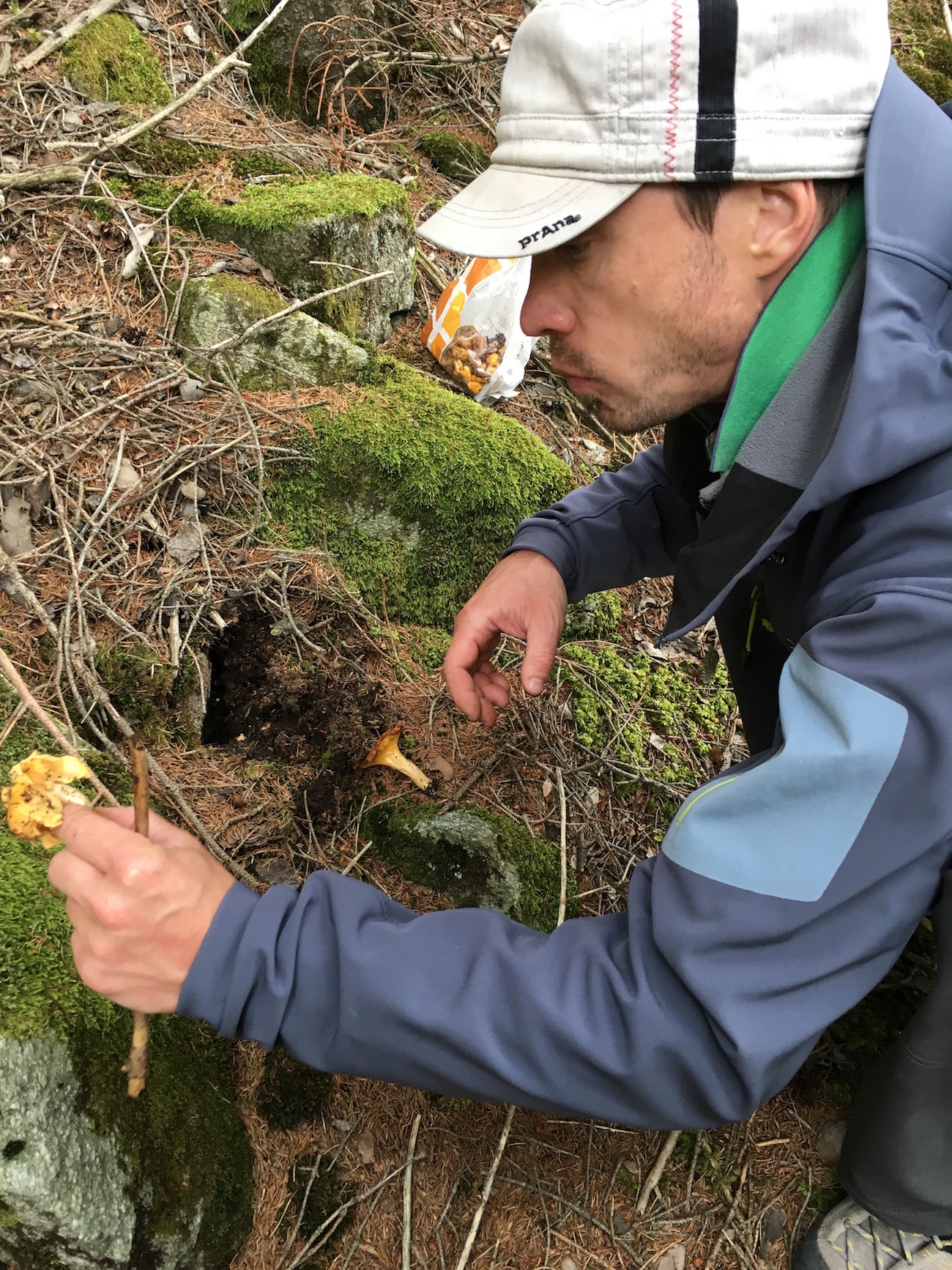 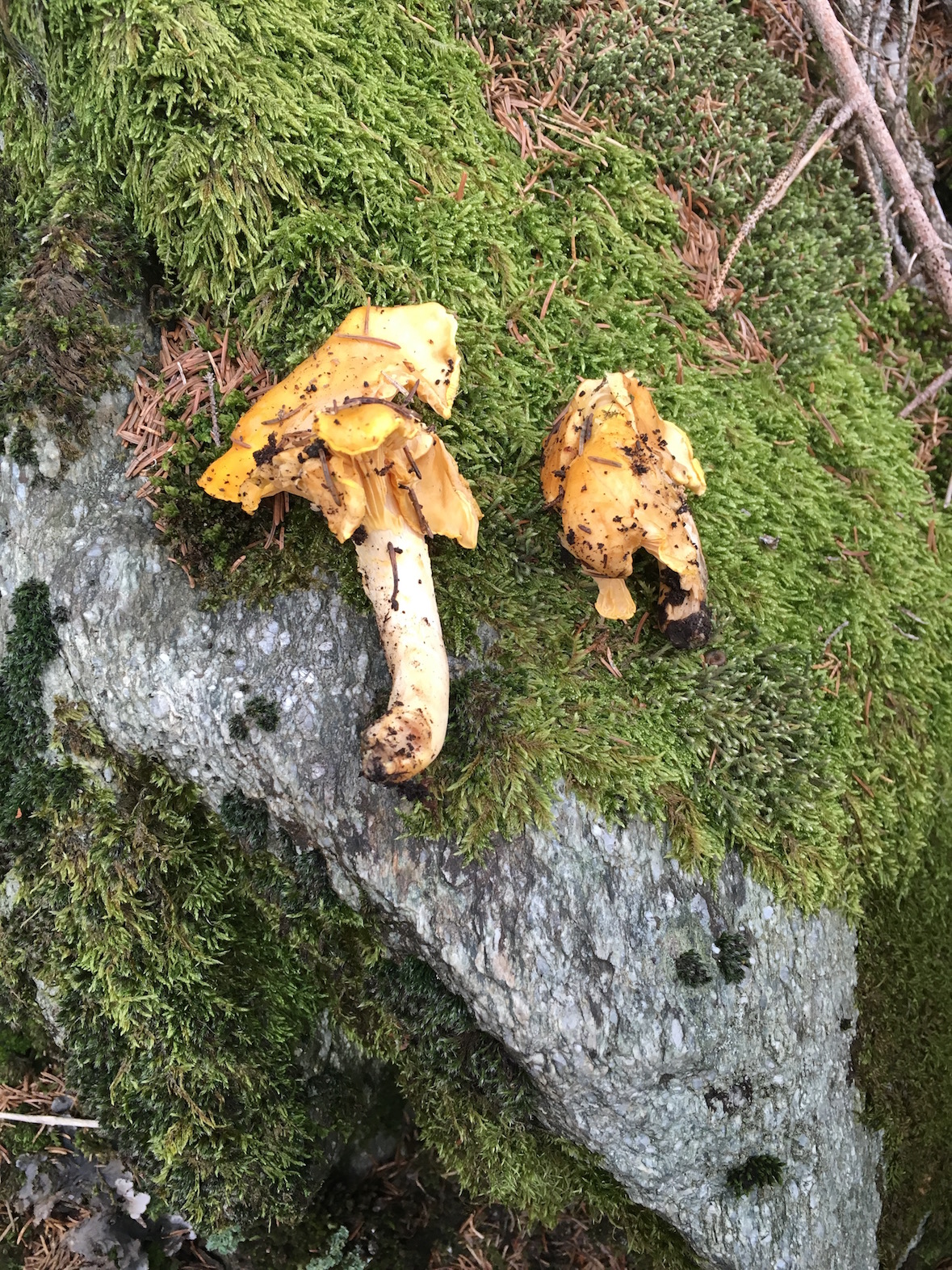 And here they are, picked 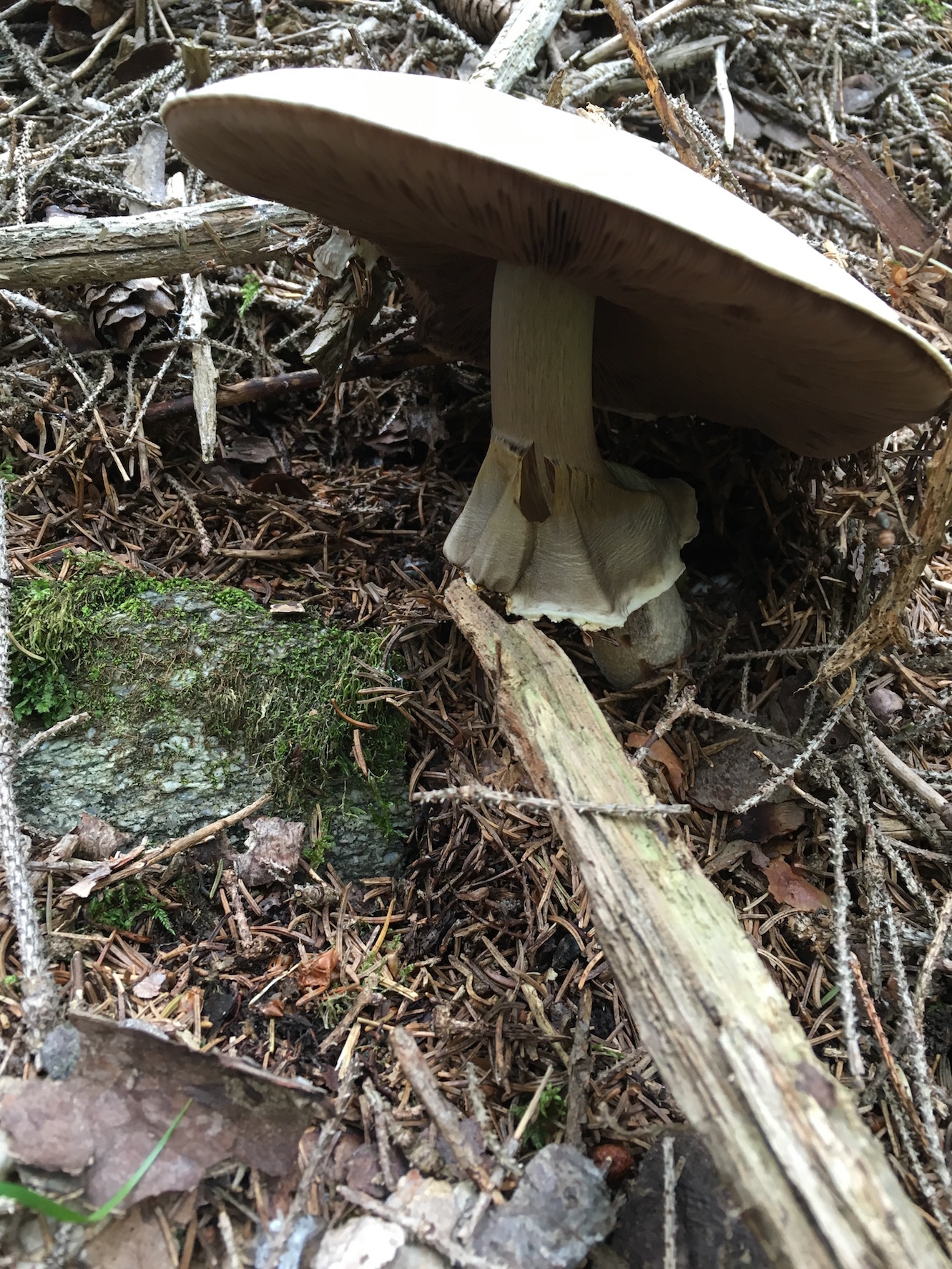 A horse mushroom before picking 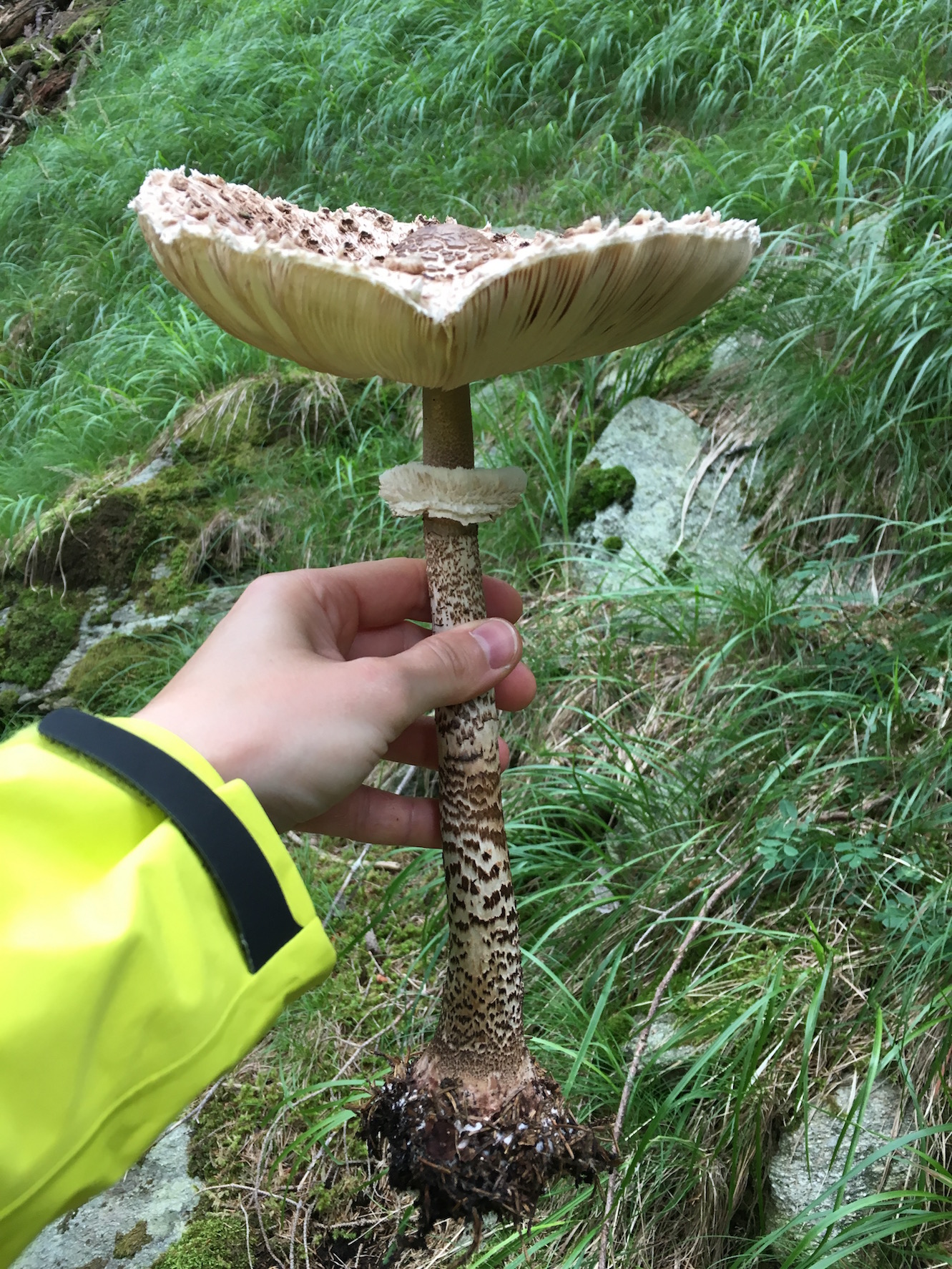 A perfect parasol mushroom. What a beauty! Very tasty when grilled or fried with flour and egg 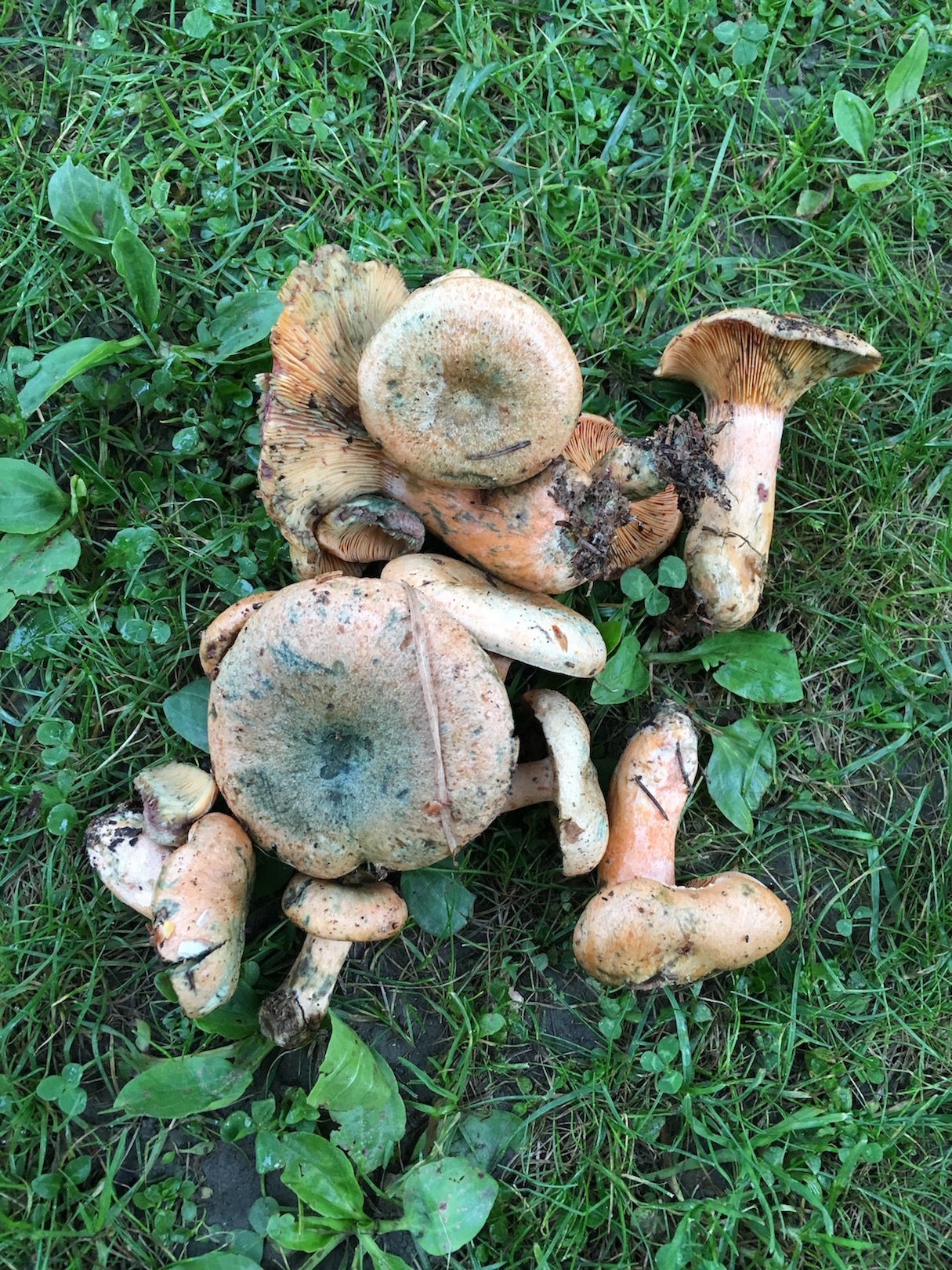 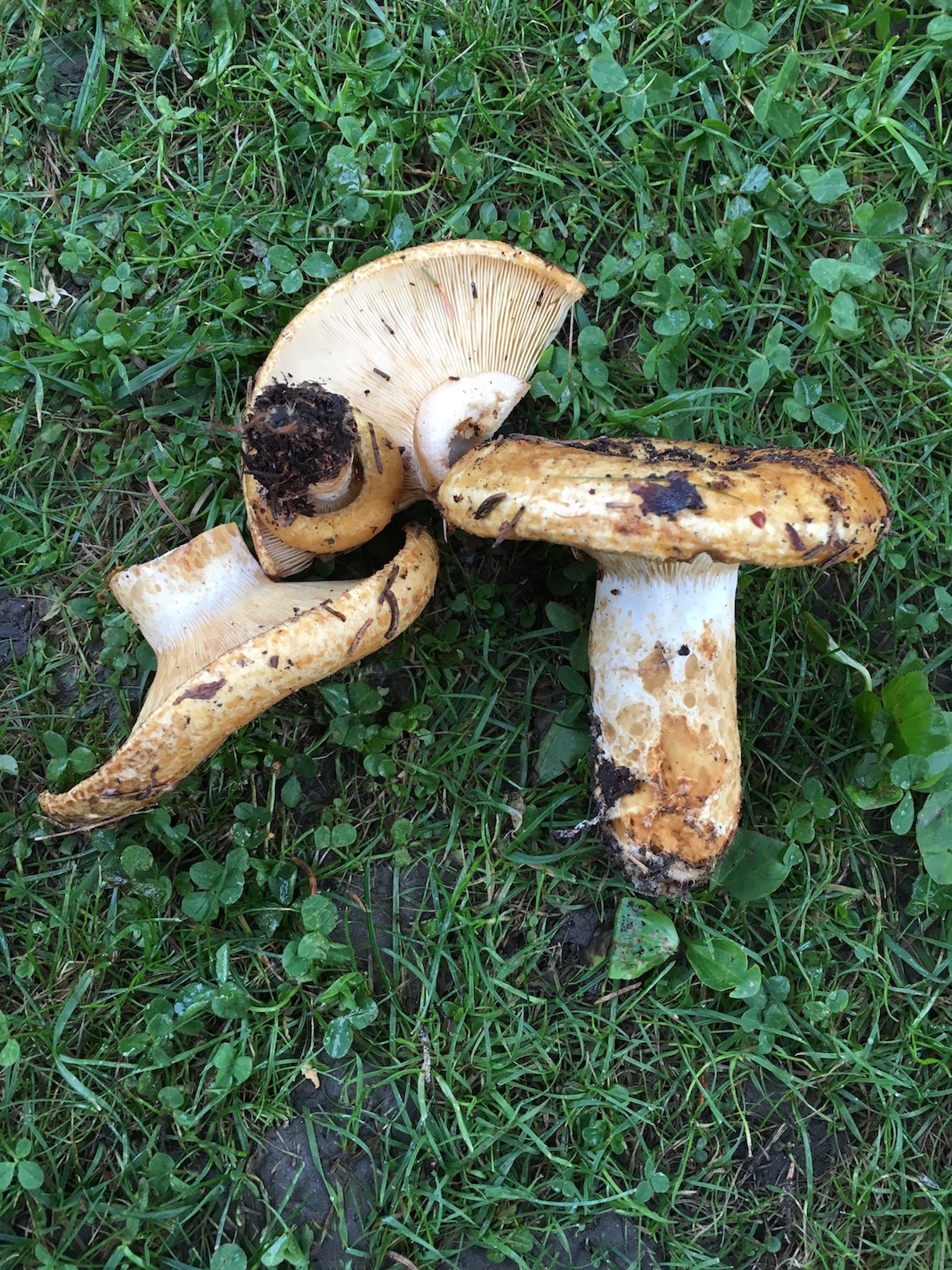 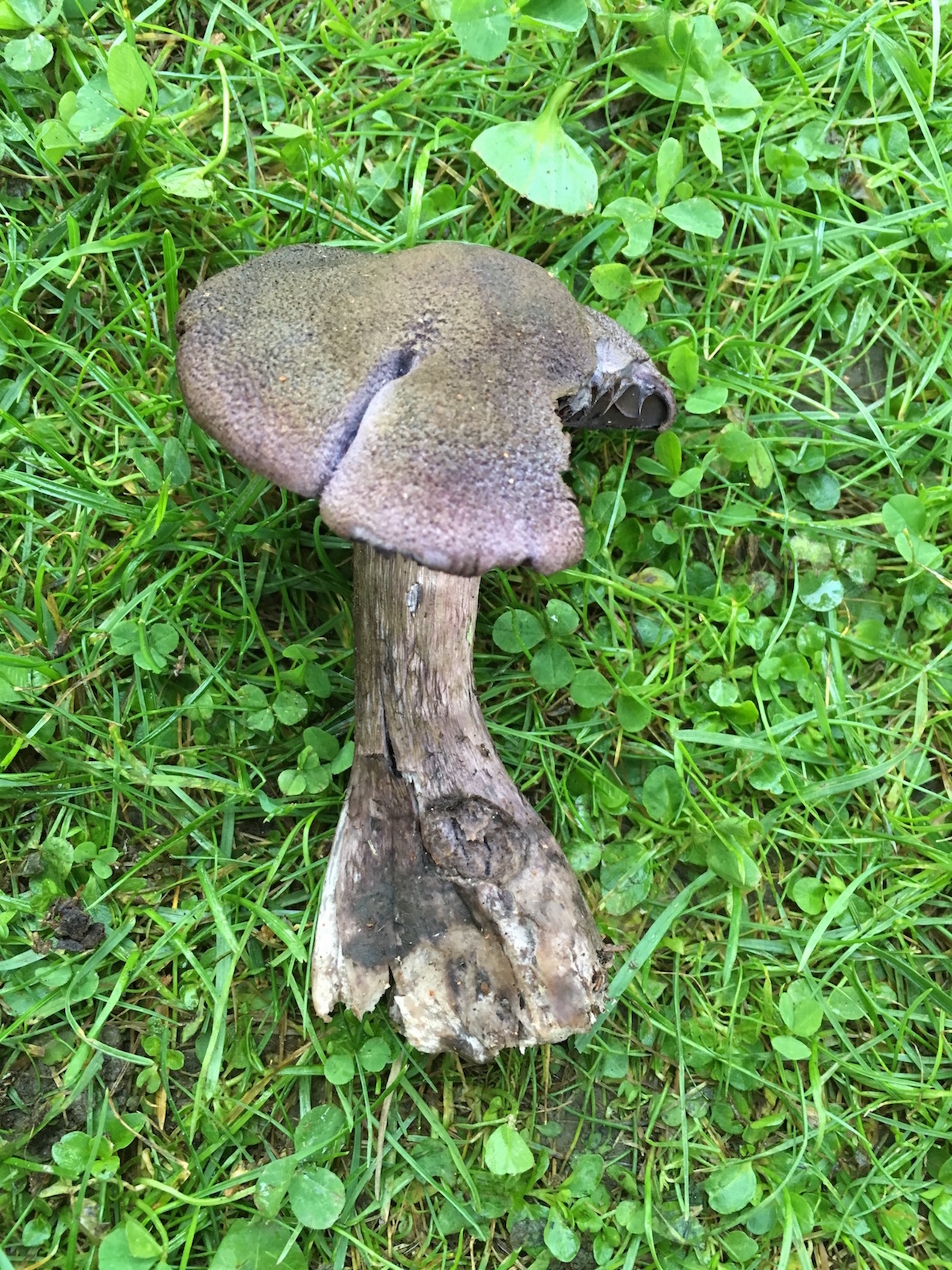 A violet webcap or violet cort (Cortinarius violaceus). Technically edible but most people pick it for its unusual colour, although this photo doesn't really do it justice 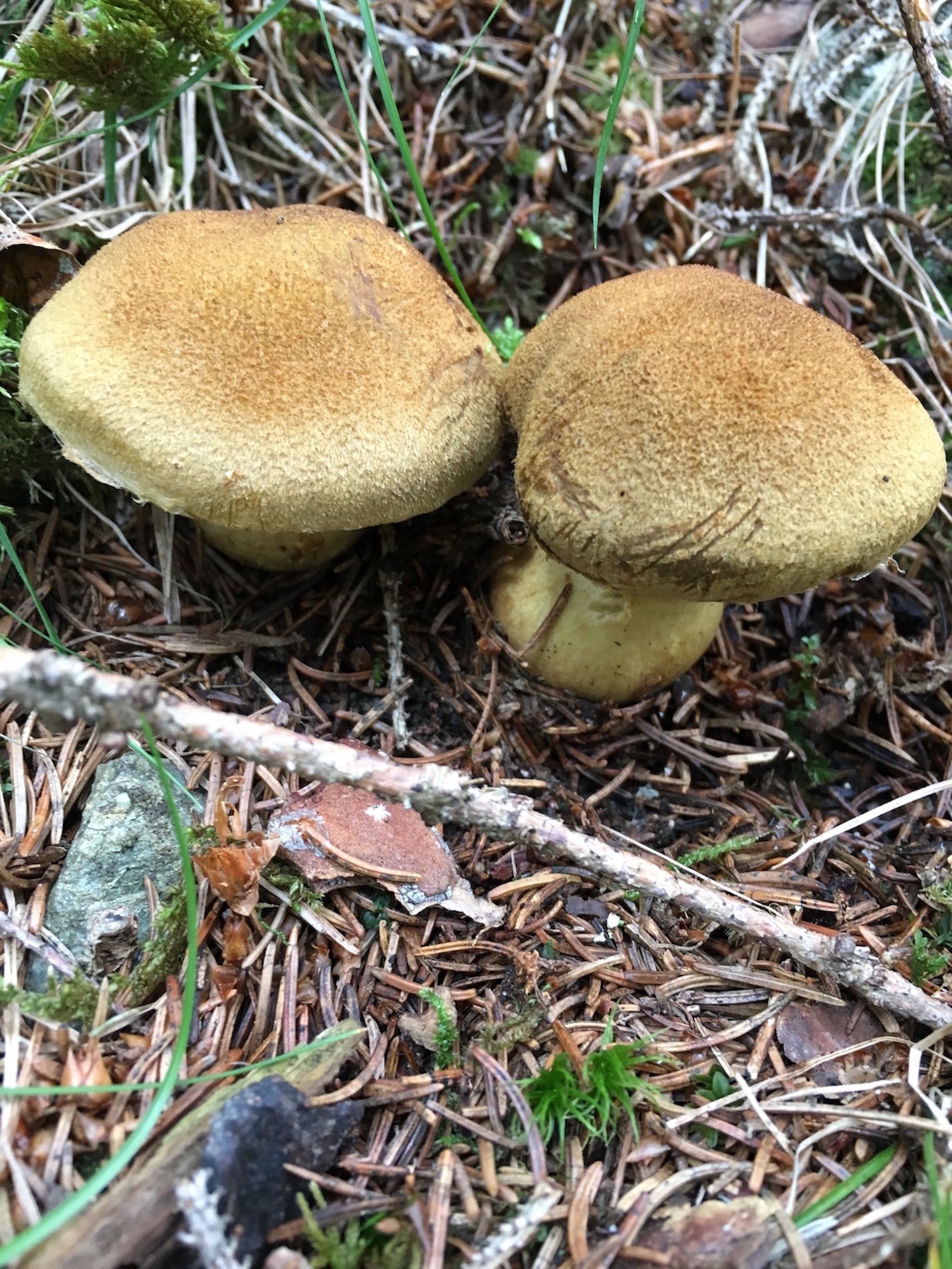 A pair of unidentified mushrooms. We didn't pick or eat these as we had no way of telling what they were

Now I can understand why some people might be reluctant to start foraging for mushrooms. For one, you might dislike the taste or texture of fungus generally, in which case, I'm sorry you got this far in the blog entry. But thanks for reading anyway.

Secondly, for those who do appreciate the taste, while there are some delicious mushrooms out there, there are also some that could make you very sick, or even kill you (in a horrible way), so misidentification is a real risk. Even the most seasoned mushroom hunters can get it wrong sometimes.

My advice is: if you're interesting in trying it, book yourself a foray with a local guide who will be able to identify what you've picked and also give you pointers on where to look. Anton and I did this a couple of times in the UK and now we abide by just one simple rule: if we're not able to identify what we've picked with 100% certainty, we throw it away.

And if you do end up loving what Antonio Carluccio calls "the quiet hunt", I can recommend his book of the same name for suggestions on how to cook your bounty. Either way, once you know a bit about mushrooms (and berries, and other edible plants), you're more likely to survive the zombie apocalypse. Fact.

Buzet, Croatia ...in a car park by a busy A road. No, seriously. And it's not as bad as you think. After the turbo debacle last month in Arco where we had to

My personal view on wild mushrooms is best described by my reaction to a British Mycological Society beautifully illustrated pamphlet, where the authors unceremoniously brushed away the question of edibility of various wild